LibreOffice does print on Tuesdays 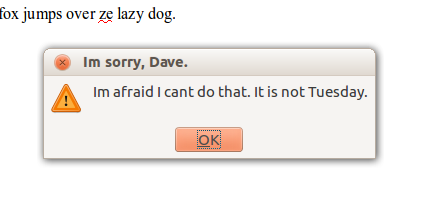 Although the "OOo does not print on Tuesdays" OpenOffice.org-bug is long fixed, OpenOffice.org never indemnified Tuesday for its loss in reputation. This is unacceptable and Tuesdays rage at the event has even passed on to its successful successor: LibreOffice. Now, Tuesday is a weekday and as such, money does not mean that much to it. After some consultation with Tuesday, it was concluded that the only way to indemnify Tuesday was to make the other weekdays suffer the same fate. Since the set of weekdays is luckily limited, this was easily considered technically feasible, even if at some minor inconvenience for the users of LibreOffice.

To limit the impact for users, instead of silently failing to act when requested to print on a non-Tuesday, for the comfort of the users of LibreOffice a notification was added that explains the situation. Tuesday -- after some heated discussion -- gave license to this modification.

It is intended to ship this extension pre-bundled with all LibreOffice releases until Tuesdays rage is soothed. It is hoped this will happen quickly as both contributors and users of LibreOffice are known for their lack of sympathy for monopoly in any kind, shape or form -- explicitly including the exclusive right of a weekday to print. For those of you excited to try out this thrilling new feature right now, the extension is available for download here:

It has to be noted that the extension is written purely in Python and is completely self-contained: it can either be treated as the oxt to be installed or as a zip file containing the source code: unpack it with the archive program of your choice, modify it to your hearts content and run the script called 'build' that you find in there. This will recreate a new (modified) extension.